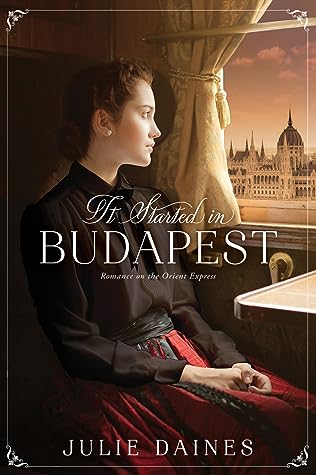 It Started in Budapest by Julie Daines

Molly Cooper is haunted by one simple fact: it is her fault her twin brother, Matthew, has spent his life trapped in a frail body while she has thrived. Deep in her heart, she knows he can’t hold on much longer . . .

In her desperation to save her brother, Molly finds inspiration in an unlikely source: the newly published novel Dracula. When her family embarks on the Orient Express to seek treatment for Matthew in Bulgaria, Molly is prepared to set her plan in motion: she will sneak away from her parents and journey alone to Transylvania, where she will seek a vampire, whose blood can make her brother immortal. Molly’s rash plan is going flawlessly—until she encounters Percy Hunt, a handsome American traveler running from the shadows of his own past. When he discovers Molly’s plan, Percy’s concern for the naive young woman leaves him no choice but to accompany her on her strange quest. But neither Percy nor Molly is prepared for the feelings that quickly grow between them or for the death-defying escapade that awaits.

This book was kind of unusual. I enjoyed the parts with the Orient Express. I wasn’t too sure about the Dracula parts. I liked the idea, but wasn’t hooked into it. Molly’s obsession with vampires was a little weird, especially referring to the Dracula book as her bible. I did like Mr. Hunt and found them to be a good pair. I don’t think I’ll continue with this series.