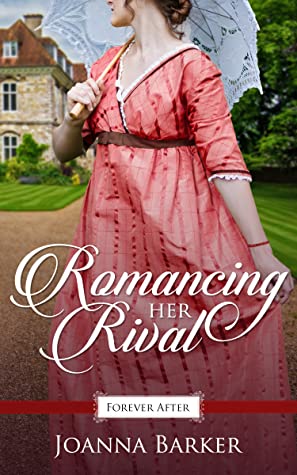 Romancing Her Rival (Promise of Forever After #2) by Joanna Barker

He stole her inheritance. She stole his heart.

Daphne Windham has depended upon one thing her entire life: inheriting her beloved great-aunt’s estate, Cheriton Hall. With her mother desperate to marry her off to the highest bidder, Daphne is relieved to escape to Cheriton for the summer—until she learns that her aunt has decided upon a different heir entirely. Cole Everard, the steward’s son and Daphne’s childhood friend. Former friend, that is.

Raised on the grounds of Cheriton, Cole Everard never imagined he would be named heir, but he is determined to prove himself worthy of the position. Unfortunately, that is easier said than done, especially when Daphne arrives claiming he is anything but worthy. Instead of their close friendship, Cole is met with cold indifference—which would sting much less if he wasn’t entirely in love with her…

Hurt and betrayed, Daphne believes her only choice is to undermine her new rival and reclaim what is rightfully hers. But that plan becomes increasingly difficult, what with Cole’s infuriating charm and kindness. When fate offers Daphne a second chance, will she take it or risk it all for the promise of love?

Romancing Her Rival is the second in a series of books about five friends. The other four novellas will be written by authors Sally Britton, Megan Walker, Heidi Kimball, and Arlem Hawks.

This was a sweet read. I liked Cole from the start and eventually warmed up to Daphne. I read the whole thing in one sitting. I liked the whole idea of this series where the group of friends passes around a bracelet for luck and having a promise to marry for love. I’m looking forward to reading the other books.