Today I would like to introduce you to: Kathleen L. Maher!

I have been reading Kathleen’s books for a couple of years now and have been really enjoying them! I love her Civil War books! I hope that you will too!

Historical Romance where every underdog has his day.
Kathleen L. Maher’s first crush was Peter Rabbit, and she’s loved conflicted heroes ever since. She has two novellas in BARBOUR BOOKS’ collections: Victorian Christmas Brides and Lessons on Love. Author of Genesis Award-winning The Abolitionist’s Daughter, as well as The Chaplain’s Daughter, No Man’s Daughter, and Amazon top-selling novella Bachelor Buttons, Kathleen lives in an old farmhouse in upstate NY with her husband of twenty-three years, their children, and a small menagerie.

A: I am fifty years old, and have been interested in story since kindergarten, when I tried my poor best to spell the words that came to me as I imagined that I would like to be a nurse when I grew up. I’m still not sure how to spell tweezers… um, tweesers? Nevermind. I gave up on the idea of nursing and thought it more fun to explore careers from a fictional lens.

I wrote my first full length novel in eighth grade. It will never see the light of day, but I did start my Sons of the Shenandoah series the next year. It survived many revisions and even a total toss in the garbage at one point. It was a stubborn story that demanded to be told, I guess.

A: I am almost ready to release Book 3 in the Sons of the Shenandoah series which features the youngest son of Virginia horse trader Sam Sharpe. Book 1 told the story of identical twins Ethan and Devon Sharpe, and how the war divided them. Book 2 was the oldest son, Gideon’s story, and how his shattered body and heart is restored in the tender care of a minister’s daughter. Benjamin Sharpe’s tale begins after the war when he sets out to make a life for himself, and finds himself in the crosshairs of an orphaned girl who has laid claim to the property he seeks to settle. It has been a fun and unexpectedly challenging story to write, as I explored the internal conflicts of a young woman who survives unspeakable cruelty and strives to find normalcy and love again.

Next, I hope to finish out the series by a split time story about the patriarch of the Sharpe clan. Sam Sharpe has been an intriguing character to me. I am ready to start his story, exploring his first marriage, its loss and widower status, and how an embittered man can find grace and rediscover tenderness and love again.

A: When I know I have to get down to serious writing, I’ll pour a big cup of coffee, and grab my phone, tuned to pandora radio. I have stations designed for certain projects. For example, I have a station that plays instrumental hymns and folk music for my Shenandoah Valley setting, and another station that plays medieval music for a project set during that time period. It immerses me in my setting and helps me connect with the characters. I love the old hymns, and often reference lyrics in my stories when I can. When I wrote my Irish Civil War novella featuring a violin teacher, you guessed it—Gaelic and Celtic fiddle music

I sit in my leather recliner with my laptop and try to accommodate two cats who always come when I’m working. I’ve bought them fleecy beds to set nearby so they’ll leave me space to work!

A: I love learning about early American history. Anything from Colonial, War of 1812, Civil War, pioneering and westward expansion…. I love the stories of when our country was young and growing. Legends and heroes like Johnny Appleseed, Daniel Boone, even great revivalists like Charles Finney.

I seem to write mostly in the nineteenth century, with a special focus on the Civil War. The conflict reaches into modern concerns over racism, federal powers versus states rights. The themes of brother versus brother and families divided over politics continue to challenge us.

A: Growing up, some of my best friends were fictional characters. I read all of the Walter Farley Black Stallion series, several of the Marguerite Henry horse stories, And Mary O’Hara’s famous Wyoming-set stories My Friend Flicka and Thunderhead. As I grew older, I still loved horse and rider stories, but they were harder to find, so I wrote them!

Another favorite book that really set me on the path of writing about the Civil War is a book called The Yankee Stranger by Elswyth Thane. The generational saga follows the lives of a prominent Virginia family through the tragedies and triumphs of the war, with romance, loss, and tenderness. I read it thirty years ago from the library, and was lucky enough to find a copy of my very own at a garage sale for $1 a few years ago! I call those special finds God kisses.

A: Oh, this is a fun question. I would say Scarlett O’Hara, but I doubt I could keep up with her! Scarlett’s rival erstwhile friend Melanie Wilkes would likely be more gracious and hospitable. I hope I would not have to wear the hoop dresses and corsets and crinolines. I’d feel like a hot air balloon stuffed into a butterfly net. But I would love to walk Twelve Oaks and learn all about life then, with particular interest in how the duties and expectations of women changed before, during, and after the war.

A: I strive for realism, even in aspects that some traditional Christian publishers would frown on. While I don’t write graphic romance or cussing in the strictest sense, I do show sin and its consequences, and the sweetness of redemption, lifting people from the depths of despair and hopelessness. The light of the gospel shines brighter when contrasted with the human condition in its stark reality at times.

I desire to show my readers that no pit is too deep that God is not deeper still. There is no circumstance he cannot save us from. This enduring hope flavors all of my stories.

I’m also featuring her newest release, No Man’s Daughter: Sons of the Shenandoah Book 3. It comes out very soon! Be sure to add it to your Goodreads shelf! 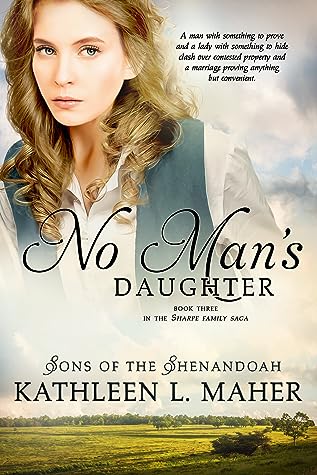 A man with something to prove and a lady with something to hide clash over hotly contested property and a marriage proving anything but convenient.
When the Sharpe’s elderly neighbor passes after the war leaving a vacant farm with no heir, Benjamin Sharpe inquires to purchase the land. What he doesn’t expect to find is a beautiful and stubborn squatter has taken residence. Will her claim on the property prove harder to drive out than her claim on his heart?
Willa looked after Old Mr. Thompson through the war until his death. The late owner promised her a permanent home there, like the daughter he never had, but with some strings attached. When young and ambitious Benjamin Sharpe shows up with intent to evict her, Willa gives him a piece of her mind with a piece of lead aimed at his boots.
The youngest of the Sharpe brothers, Benjamin has been bossed around his entire life by his brothers, and he isn’t about to take it from any girl. All three of his brothers have veterans’ boasting rights in the War, and he must prove his mettle, too. But will his ambitions go so far as to force a waif from her home? As the girl’s resourceful defense of the property frustrates his plans, admiration plucks at his heartstrings. Ben must find a compromise while saving face with his family. But the chit has no intention of playing nice or seeking truce. In Bridgewater, Virginia, the war is still on!

Kathleen has graciously offered to giveaway an ebook copy of No Man’s Daughter to someone that leaves a comment or asks her a question! The giveaway will run until Memorial Day!

Thank you Kathleen for your time! Please leave some love in the comments!