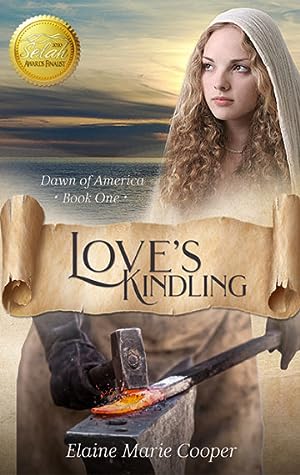 (Note: This book, previously published by Burnett Young Books in February 2019, is being re-edited and published in one volume that will include its prequel, War’s Respite. Love’s Kindling is Book One of Elaine’s Dawn of America series.)

During the American Revolution, Aurinda Whitney lives with her cold and calloused father, an embittered veteran of the previous war. Aurinda’s life changed forever when her father returned for her after that war, taking her away from the only place she’d ever experienced affection. Since her father blamed Aurinda for the death of his wife in childbirth, Aurinda is convinced she is unworthy of love.

Zadok Wooding believes he is a failure as he tends the smithy at home while others go to battle against the British. Just when he has an opportunity to become a hero, he is blinded in an accident. Now he fears he will never live up to the Biblical “mighty man of valor” for whom he was named.

When the couple meet, they are both challenged to overcome adversity as well as their inadequacies. Unexpected secrets of their past emerge that can change their lives forever. But can they look past their present circumstances to heal—and find love?

In 1763, the war with the French came to a close. While most Connecticut colonists breathe in relief, others are faced with unexpected conflicts as battles of a different nature ensue at home.

Veteran Abijah Whitney regrets leaving his pregnant wife behind when he was called away to war. The news of her death during childbirth as well as the ugly brutalities of war have left their mark. His only comfort is the knowledge that his daughter survived. But his plans for her upon his return will cause an uproar in many lives, including the aunt who raised her.

Primrose Allan’s sole consolation after the death of her sister in childbirth is the baby girl who lived. The aunt raises the girl as her own, fearing that one day the girl’s father might return for her. But Primrose never imagined the nightmare that would ensue.

Dr. Isaac Northrup is a friend caught in the middle of the turmoil. Always desiring to bring healing, he feels helpless in the events that cause pain and heartache to others, as well as himself.

Jonas Wooding, the town’s blacksmith, is caught in the strife, made all the worse by a serious epidemic. Bound by constrictions of local law and forced to face his own grief, Jonas’s trust in God is stretched beyond endurance.

When all seems lost, will faith endure?

I absolutely loved it! The amount of detail is amazing! I love the message that I got from this. I’m not sure if this was what was intended, but I got the message about seeing ourselves through God’s eyes and not believing the bad things we might have heard about our appearance. We are all beautiful inside and out. The characters were great! This is definitely going on my keeper shelf!