Today I would like to introduce you to: Melissa Tagg!

Melissa is one of my favorite contemporary fiction authors! She’s such a sweet lady!

Melissa has taught at national writing conferences, as well as workshops and women’s retreats. When she’s not happily lost in someone else’s book or plugging away her own, she can be found spoiling her nieces and nephews, watching old movies, and daydreaming about her next fictional hero. Connect with Melissa at melissatagg.com.

A: Well, pretty much as long as I can remember. ☺ I can’t recall ever not wanting to be an author. As a kid, I was a mega bookworm and had dreams of writing my own books and thus filled notebook after notebook with scribbled stories.

But as to when I got serious about pursuing a career as a novelist, that started around 2009 when I attended my first weekend writing retreat up in Minnesota led by the amazing Susan May Warren. I’d fiddled with a story idea or two before that point, but that retreat was my first serious step toward my publishing dream. About a year later, I attended my first large conference and started the process of pitching ideas to editors and agents. I signed my first publishing contract in the summer of 2012.

A: I’m actually just about to start a new three-book series that I’m probably overly excited about! It doesn’t take place in Maple Valley (the small fictional town where the vast majority of my stories are set), so I hope readers aren’t too disappointed by that. (And I promise there are more Maple Valley stories to come in the future!) But I’ve been in need of a bit of a creative change-up, so I’m pumped to create a new town in a new state filled with new characters who are already tugging on my heart in a huge way. The stories will be set in a seaside town in New England and the first book in the series features a Scottish hero named Neil. 😍😍😍

A: My biggest must have is, simply, quiet. I can’t write to music or conversation around me. I like quiet and no distractions. Also, I tend to turn off my wi-fi and hide my phone. ☺ And I always have something to drink with me—coffee, peppermint tea, or Diet Coke accompanied by the big water bottle I lug around everywhere with me.

A: To write about, at this point, is contemporary because that’s mainly all I’ve written. But do I have a dream of eventually writing a historical romance? Definitely. By far my favorite genre to read is historical romance and I like just about any era—regency, colonial, Golden Age, etc.

A: Oh boy, well, I could spend about a year answering this question. Haha! But I will force myself to narrow it down to the first ones that come to mind:

The Lady & The Lionheart by Joanne Bischof

Whose Waves These Are by Amanda Dykes

Sons of Thunder by Susan May Warren

A: Well, I’m going to bar myself from picking any of my own characters because I could just spend forever debating between several of them. Instead, I’m going to go with Charlie Lionheart from Joanne Bischof’s The Lady & The Lionheart because not only do I adore him with every inch of my heart, but it’d also come with the benefit of getting to hang out with his lions. Haha!

A: This is going to be an odd answer, but I’m realizing right now as I answer this that what I really want readers to take away is…feeling. Of any kind. I want them to feel the story somehow so strongly and deeply that it evokes their own emotions, tugs on their own hopes or dreams, reveals and/or speaks to their own struggles, and helps them process their own journey. Which is probably an overly expansive and vague answer, but I truly think the best stories are ones that meet readers right where they’re at and speak different truths to different people. I’ll never forget an author friend texting me to tell me that a theme in one of my Christmas novellas made her weep—and I honestly hadn’t even realized that theme was in there. That’s what I love about stories! They’re powerful and they can be so wonderfully, magically individual. So that’s it—I want readers to feel. (And if they happen to swoon at the romance and fall in love with the characters and get captivated by the plot, well, all the better.)

I’m also featuring her newest release, Some Bright Someday. Its the 2nd book in the Maple Valley series. You don’t want to miss out on this book! Be sure to add it to your Goodreads shelf! 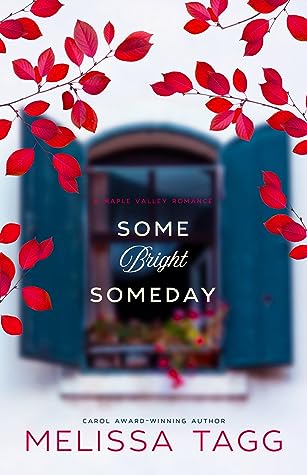 He’s torn between love and honor…

Lucas Danby has always regretted the decisions that caused his dishonorable discharge from the military—and he’s never stopped trying to redeem his honor. He’s spent the past decade taking on dangerous short-term missions as an elite private soldier—the only part of his life that’s ever gone right. But the high-risk work never cures his shame. Now he’s stuck stateside, mentoring a new recruit. Worse, he’s sick of lying to the people he cares about most—including the woman he’s secretly loved for years.

She can’t escape her house of memories…

Jenessa Belville should be happy. She’s the hometown girl everyone loves, after all. But she’s also the last Belville left—and if she had her way, she’d leave the name and all its painful memories behind. Which is exactly what she hopes to do once she sells Belville Park, the massive estate she inherited from her parents. First, though, she needs to restore the property’s once-glorious gardens. But on the same day she puts up the “For Sale” sign, she discovers three children hiding in the caretaker’s cottage, thrusting her into the unexpected role of temporary guardian.

Fighting for their future means healing from the past…

Struggling to mentor a young man with scars nearly as piercing as his own, Lucas offers to help Jenessa restore the Belville grounds. Though drawn together by a trio of kids who tug on their hearts and the sparks they can’t deny, past secrets and current sorrows threaten to pull them apart. Only the brightest love and hardest sacrifice can turn the house Jenessa never wanted into the home she and Lucas have always longed for.

Thank you Melissa for your time! Please leave some love in the comments!