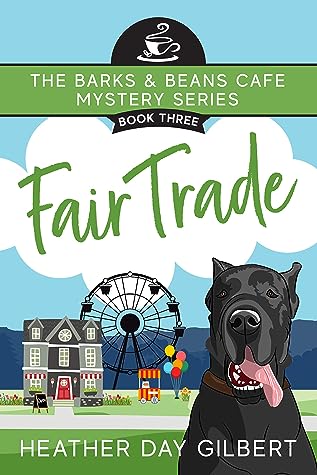 Welcome to the Barks & Beans Cafe, a quaint place where folks pet shelter dogs while enjoying a cup of java…and where murder sometimes pays a visit.

With the one-year anniversary of the now-successful Barks & Beans Cafe approaching, siblings Macy and Bo Hatfield set up an iced coffee booth at the state fair. Taking a break from brewing, Macy bumps into Carolina, a long-lost childhood friend who’s now sitting pretty as a country superstar. Macy tries not to fangirl too hard when her old friend extends an invitation to meet the rest of the Carolina Crush band before their opening show.

But when Carolina falls victim to not one, but two near-death experiences, Macy takes it upon herself to find out who has it in for her old friend. Fortified with plenty of roasted corn, cinnamon rolls, and her brother’s signature iced maple latte, Macy takes to the Ferris wheel to get the lay of the land from the air. She discovers too late that this year’s fair isn’t all fun and games…but she’s already locked in for the ride.

Join siblings Macy and Bo Hatfield as they sniff out crimes in their hometown…with plenty of dogs along for the ride! The Barks & Beans Cafe cozy mystery series features a small town, an amateur sleuth, and no swearing or graphic scenes.

I absolutely love this series! I couldn’t put this book down and read it in one sitting! I love Macy and Bo! Every time I read one of these books I get so invested in their story! I was also pleasantly surprised by the cameo appearance of some familiar characters from another favorite series! I can’t wait for the next book!