Today I would like to introduce you to: Tara Johnson!

Tara is such a dear, kind woman! She has been such a blessing to me! Her books are amazing!

Tara Johnson is an author and speaker, and loves to write stories that help people break free from the lies they believe about themselves.

Tara’s debut novel Engraved on the Heart (Tyndale) earned a starred review from Publishers Weekly, and finaled in the Carol and Christy awards. In addition to being published in a variety of digital and print magazines, she has been a featured guest on Voice of Truth radio, Enduring Word radio, television and podcasts. Her third novel All Through the Night is set to release in January of 2021. She is a history nerd, especially the Civil War, and adores making people laugh. She, her husband, and children live in Arkansas.

A: I’ve been writing for about twelve years. A story idea wouldn’t leave me alone and so I began writing it while my kids napped in the afternoons.

A: So many stories! lol I’m juggling three different ones at the moment. I’m halfway through a story based on the life of Dr. Mary Walker. She was an abolitionist, prisoner of war, surgeon for the Union during the Civil War, and was the only women ever awarded the Medal of Honor. Another one I just started is about a girl who sold as part of the Irish slave trade and sent to Barbados before coming to South Carolina. The character Avalina also suffers from selective mutism. I’m learning so much about this period in history as well as her particular condition. My own niece battles it and I’m excited to learn as much as I can. The third story is a children’s book tentatively titled Sarah Grace: Holy Terror. It’s about a precocious preacher’s kid who has a tendency to get into some hilarious predicaments and learns some valuable lessons along the way. Think Junie B. Jones meets Sunday School. 😀

A: In the summer, I have lots of flavored water on hand, and in the winter, I keep a continual supply of flavored hot tea by my computer. (Ever since traveling to Great Britain, I’m a little bit of a tea snob! lol) My favorite is hazelnut cookie hot tea with a splash of milk. When I’m eating like I’m supposed to, I nibble on carrot sticks or blackberries, but when a character is being ornery, I reach for peanut M&Ms.

A: My favorite time period to write about is the Civil War. I’ve done so much research it comes easier for me than other genres, but I love reading about anything that’s older than me. lol I’m especially fond of WW2 biographies and a good historical romance in any era.

A: The Bible, of course, but as far as fiction goes, Anne’s House of Dreams by L.M. Montgomery was a powerful influence on me growing up, not just in writing and characterization, but in critical thinking. I love Francine Rivers’ Mark of the Lion series, as well as To Kill a Mockingbird and Pride and Prejudice. My bookshelves at home are full so it’s hard to even mention a few. I’m an avid reader across all genres.

A: Oh, that’s tough! I think spending a day dreaming and creating with Anne Shirley-Blythe would be soul-refreshing. A close second would be a charismatic guy like Charlie Lionheart, who could enthrall me with daring tales from the circus, although I think I’d prefer a wise man, full of wisdom like Atticus Finch. I enjoy chatting about books, politics and world events with older fellows who have seen more of life than myself.

A: More than anything, I want my readers to find freedom…freedom from lies they have believed about themselves. So many of us have fallen for the lie that we’re worthless, that we’ll never measure up, that God can never forgive us for the mistakes we’ve made. But His love is so much stronger, wider, and higher than anything we can imagine. I want my readers to find joy and hope in His unconditional love.

I’m also featuring her latest release, Where Dandelions Bloom. It came out last Summer. It is so good! Don’t forget to add it to your Goodreads shelf! 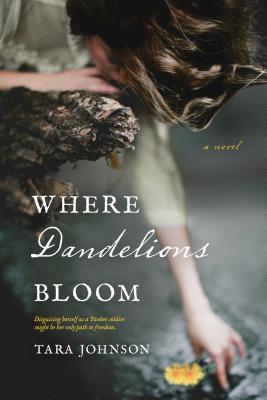 Cassie Kendrick is on the run. Her abusive father arranged her marriage to a despicable man, but she’s discovered an escape. Disguised as a man, Cassie enlists in the Union army, taking the name Thomas Turner. On the battlefields of the Civil War, keeping her identity a secret is only the beginning of her problems, especially after she meets Gabriel Avery, a handsome young photographer.

Anxious to make his mark on the world and to erase the darkness and guilt lurking from his past, Gabriel works with renowned photographer Matthew Brady to capture images from the front lines of the war. As Gabriel forges friendships with many of the men he encounters, he wonders what the courageous, unpredictable Thomas Turner is hiding.

Battling betrayal, their own personal demons, and a country torn apart by war, can Cassie and Gabriel learn to forgive themselves and trust their futures to the God who births hope and healing in the darkest places?

Thank you Tara for your time! Please leave some love in the comments!